On the 25th of March 2019, The Lancashire Council of Mosques hosted a presentation at Bangor Street Community Centre in Blackburn where Shaukat Warraich of Faith Associates spoke to attendees on how to improve the security of Mosques and Madrassah. 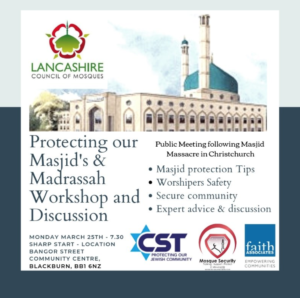 The event was held following the Christchurch terror attacks in which 50 people were gunned down by a right-wing extremist.

Since then mosques up and down the country have been looking at their own security arrangements and the safety of their worshippers.

The event was chaired by Chairman of Lancashire Council of Mosques, Abdul Hamid Qureshi with an introduction by Maullana Rafiq Sufi.

In attendance was Colin from the Community Security Trust which among other things aims to promote good relations between British Jews and the rest of British society by working towards the elimination of racism, and antisemitism in particular.

The discussions looked to find common ground between Jews and Muslims in addressing security concerns at their religious buildings.

Speaking on the night Shaukat of Faith Associates said mosques and madrassah could follow simple procedures to improve safety. 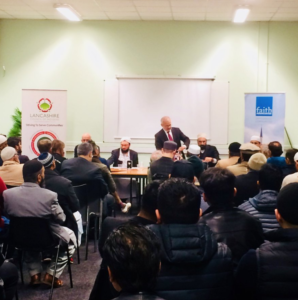 This safety began with plans for evacuation in case of an emergency.

Mr Warraich was surprised how many don’t do simple fire drills, “A simple evacuation procedure is something I see rarely at mosques and madressas.

“How many children use these premises on a daily basis? Hundreds?”

He added, “I came from London and most of the masajids were releasing their children (The end of the teaching period). The streets were busy and children were running around yet I only one saw person with a hi-viz jacket on.

“We have invested millions of pounds on physical infrastructure. Now is the time to start investing in people.”

For more information on Mosque Security, see our website here.