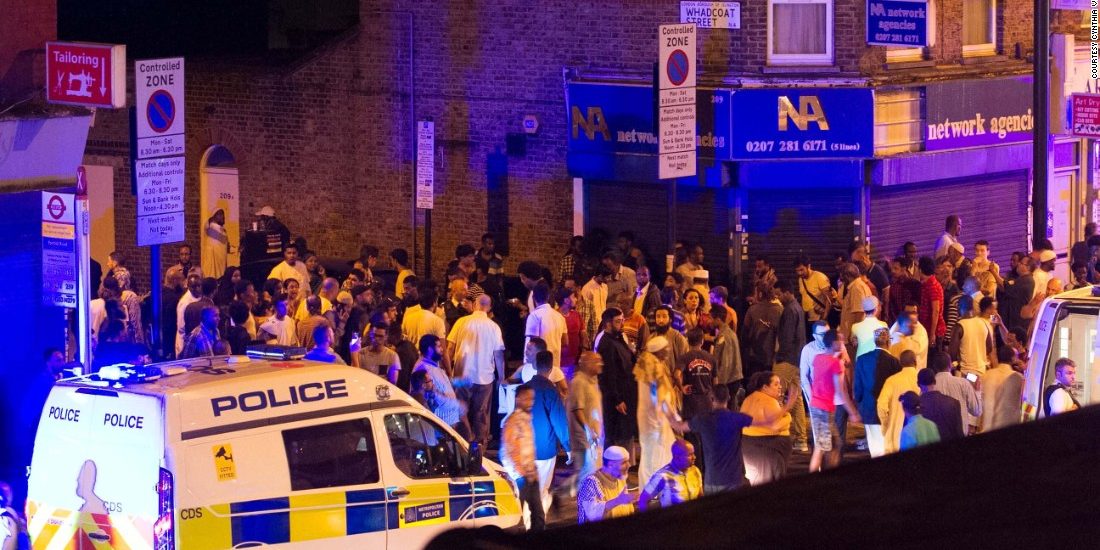 Muslim worshippers leaving the Mosque after Ramadan night prayers were the victims of a vile targeted attack last night as a man in a van ploughed into a group of Muslims. Reports so far say that one person has died with a further 8 injured, some quite severely. Initial eye witness testimony from the scene of the attack claimed that the perpetrator, who was arrested at the scene, was heard to have said “I want to kill all Muslims”.

The attack took place around the Finsbury Park area of North London, outside the Muslim Welfare House, as Mosque worshippers were leaving from having been praying the Ramadan night prayers (taraweeh). Whilst the investigation into the attack is ongoing, it is being treated as a terrorist attack as the London Mayor said this morning, “Terrorism is terrorism irrespective of the motivations behind it” and the Prime Minister said, “This was an attack on Muslims near their place of worship. This is a reminder that terrorism, extremism and hatred take many forms”.

In an already very difficult week for London following the tragedy at Grenfell Tower, this attack on the Muslim community comes at time of heightened anxiety and brings into sharp focus the reality of Islamophobia. With Anti-Muslim hate crime on the rise, there was a feeling of ‘if not when’ that this rising hate would manifest into something more sinister.

What this attack once again highlighted is that extremism exists in all parts of society and that there is no differentiation from people who inspire such terror as to who is harmed. The unfortunate hallmark for those who commit these atrocities is that they see innocent bystanders as prime targets and the best way to maximise the impact and exaggerate the fear they are trying to cause.

For this attack to take place in the holy month of Ramadan makes it even more difficult to bear. As Muslims come together in this month as a way of getting closer to God and increase in their charity and good deeds, attacks like this instil fear and a reluctance to openly express religion.

What this attack further highlights for the British Muslim community is the vulnerability and risk that exists around Mosques and Islamic Centres. With the exponential rise of Anti-Muslim sentiment across the world, through the political rhetoric of far-right politicians and groups, the safety and security of Islamic faith institutions is something that needs to be taken very seriously. The continued vilification and demonization of an entire community provides legitimacy for extremists to commit atrocities on places of worship and will only continue to divide communities further.

Within this context, Faith Associates in partnership with 8 national Mosque councils as well as the National Association of Muslim Police, has developed a 10 point ‘Mosque, Islamic Centre and Madrassah Security and Safety Tips’ leaflet that outlines a series of easy to understand and implement action points to help ensure places of worship are kept safe and secure.

Whilst it remains paramount that faith communities are alert to the threat and prepared to deal with crises, there is also an onus on local police and security services to develop collaborative approaches with faith institutions that work towards mitigating these threats and help build trust between local communities and local authorities. There must be a concerted effort to eradicate hate crimes from our society and ensure that all communities feel safe and protected.

We continue to pray for those that have been directly affected by this atrocity and for the welfare and safety of all those in society, be they of faith or not.