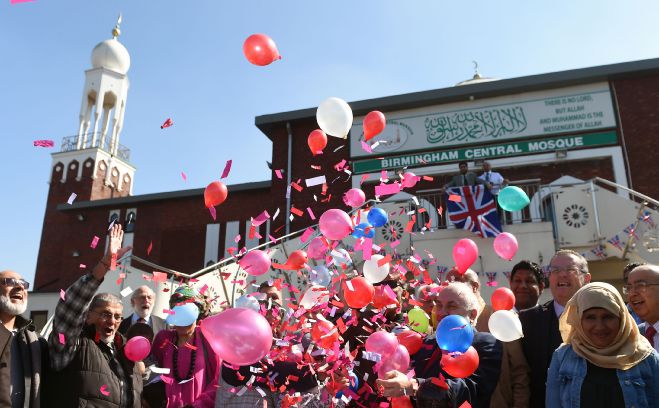 Birmingham Central Mosque held a ‘Very British Tea Pary’ over the weekend in response to an EDL march taking place in the city.

It drew an audience of more than 300 people from all faiths, ages and backgrounds to the Mosque by promising guests they could have custard creams and digestive biscuits along with samosas and cups of tea.

Union Flags were draped over their shoulders as well as the mosque’s balcony railings.

The tea party was attended by three times as many people as the EDL rally, which led to three arrests.

Sporting a Union Flag around his shoulders, the mosque’s executive board member Mohammed Dawood sent out a clear message to protesters,

“We haven’t got anything against the EDL. We don’t hate you. We are very happy to have the majority of the Birmingham community here to represent the diverse community. We should all unite and live in peace with each other.”

“Brummies are showing that we are carrying on as normal. We are going to drink tea, have cake and sweets. There’s one great community in this city and that’s the community of Birmingham. We are all British Brummies, all the other labels come after that. We just wanted to show the extremists in this town that we are just get on with things. You are not going to disrupt our lives.”