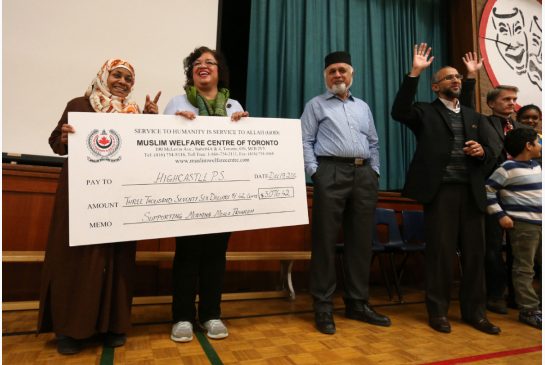 The Muslim Welfare Centre, a local charity based in Scarborough, was on a tour of city schools to see the student nutrition program, run by the Toronto Foundation for Student Success, at work.

The student nutrition program has been operating in schools across the Toronto District School Board since 1999. By next year, the program, run by the charitable arm of the TDSB, will feed kids breakfast, snack or lunch in almost a thousand schools across the city. This year, the Muslim Welfare Centre will fund the programs in 14 schools in the city’s least affluent neighbourhoods. Their donation of $30,000 will feed more than 4,500 students.

Traditionally, Muslims, who consider charity a fundamental part of their faith, have looked overseas to support charitable initiatives — often in their country of origin. But the Muslim Welfare Centre’s involvement in local programs is forcing attitudes within the community to change.

Inspired, other Islamic charities such as Islamic Relief Canada are also making domestic projects a priority. In 2014, Islamic Relief Canada gave significant financial contribution to the Daily Bread Food Bank and the Flemingdon Food Bank; to the Sick Kids Foundation for training of Palestinian doctors; and Habitat for Humanity, to build affordable housing for underprivileged families.